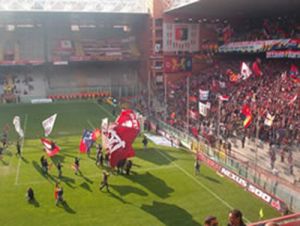 Tomorrow-evening at 20.30 hours the friends of Genoa and Torino play against each other in the Olympic stadium of Torino. Despite the fact that it is forbidden to Genoa-fans to visit the match, around 500 are expected inbetween their Granata-friends. The team of Mr. Gasperini will be certainly different of last weeks. Three of our regulary line-up midfielders (Paro, Juric and Danilo) are banned because of their 4th yellow card last week. Every week it is a suprise which eleven Genoani start the match, but let’s try for tomorrow: Rubinho; Bega, Bovo, Lucarelli; Rossi, Konko, Coppola (Milanetto), Fabiano; Leon; Borriello and Figueroa.