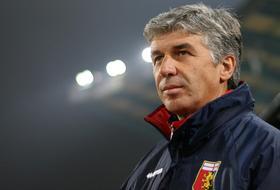 Genoa coach Gian Piero Gasperini today told the press that he wants at least 51 points at the end of the season. Halfway the season Genoa had 25 points and our coach wants to see progression in the second half of the season, so at least 26 points.

In the first 11 matches of the season Genoa collected 14 points (3 victories against Udinese, Napoli + Cagliari and 5 draws against Catania, Livorno, Sampdoria, Fiorentina and Palermo) just like in the first 11 returnmatches (4 victories against Catania, Udinese, Napoli + Palermo and 2 draws against Livorno and Inter). In the last 8 matches of the first half of the season Genoa earned 11 points (3 victories against Parma, Lazio + Atalanta and 2 draws against Torino and Empoli), so now in the last 8 matches Mr. Gasperini wants at least 12 points on top of the 39 points we have now. Looking at the standings it is the best if we beat in any case Reggina, Empoli and Parma that are all in the relegation-zone and we draw or also win against Torino, Siena and Lazio.