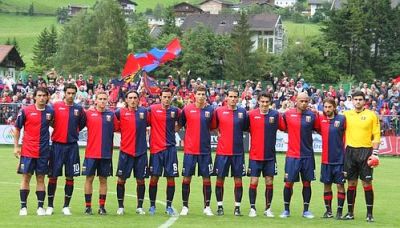 Yesterday Genoa played the first friendly match of the season in Neustifst (Austria) against the hometeam Stubaital. The Grifoni scored 18 times, 7 in the first and 11 in the second half. The last goal of the match was, as a matter of friendship, scored by Stubaital in the 90th minute. Topscorer of Genoa was Olivera with 4 goals, Di Vaio (3), Di Gennaro (2), Greco (2), Pinau (2) and Palladino, Biava, Mesto, Rossi and Sculli all 1 goal. Genoa missed the injured Figueroa and Paro.

Last week Genoa sold Leon and Lucarelli to Parma in Serie B, while the transfer of Olivera to Genoa now is official.