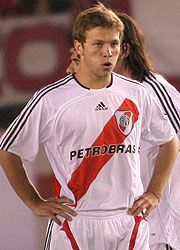 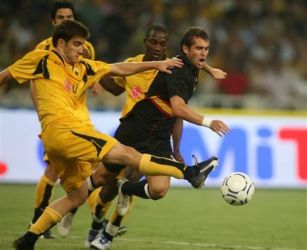 Today Genoa presented the 13th new arrival this summer: talented midfielder Nicolas Domingo. The little 23 years old Argentinian player (1.74) played with River Plate. It looks like Genoa finally has found a subsitute of defender Cesare Bovo who returned to Palermo. In the battle with Ajax, that offered € 3,5 million to AEK Athens, the rumours say that Genoa did the best offer with € 4 million, so the very talented central defender Sokratis Papastathopoulos will wear the Rossoblu shirt in a few days. Will be continued ….

Today Genoa played the second friendly match against the Italian Serie C-2 team: AC Rodengo Saiano. The Gasperini-boys scored 4 times: Sculli and Olivera (twice) before halftime and Palladino after the break. Rubinho and Scarpi stayed unbeaten, so Genoa won by 4-0. The next friendly match is Friday 1st August against AEK Athens, the (ex?) team of Papastathopoulos.