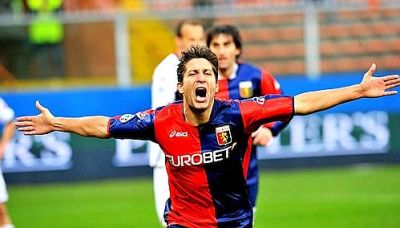 Genoa is again stopped by ex-players. After the defeats in the beginning of the season in Catania and Palermo by winning goals of ex-players Giuseppe Mascara and Cesare Bovo, this time it was Marco di Vaio out of a cross of Adailton who scored the equalizer: 1-1.

Maybe because of the terrible wetter, the first half of Genoa-Bologna was a little disappointing without many chances. In the 2nd half with Gasbarroni as substitute of Palladino the match was much more attractive. In the 54th minute Giuseppe Sculli scored the opening goal after a perfect cross of Gasbarroni and 9 minutes later Marco di Vaio headed the ball behind Rubinho: 1-1. In the last half hour both teams had changes to score the winning goal, but Potenza and Milito of Genoa and Di Vaio of Bologna could not beat the goalkeepers once again. Luckily only Vanden Borre got a yellow card, so nobody will be squalified for the derby next Sunday and also no player got injured.