Last Saturday, 1 day before his 33rd birthday, Omar Milanetto received our yearly trophy in the pressroom of the Pegli trainingsfield. The very friendly playmaker was happy with the trophy and thanked the Genoa-supporters from Holland and Belgium as an example of all Genoa-fans outside Italy for their support. We hope that Omar, who played a good match against Bologna the day after receiving the trophy, can stay in the line-up now the squalification of Thiago Motta is over. In our opinion both can play together in the heart of the midfield next Sunday in the lighthouse derby, but of course it’s in the hands of Mr. Gasperini, our last Genoa Club Amsterdam Genoano of the year. 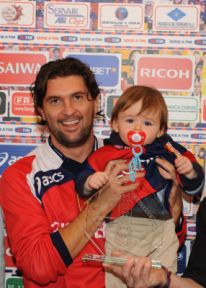