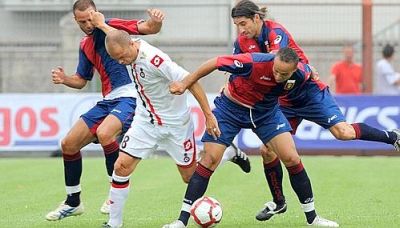 After beating Acqui Terme by 0-6 last Wednesday (2 goals of Milanetto; Fatic, Juric, Rossi and Modesto all scored once) yesterday Genoa played in Piëmonte against Olympique Nice of the France Ligue 1. De match started with a delay of half an hour because of an attack of 400 French (and Torino ?) hooligans against the Genoa-supporters. A cowardly action because 95% of the Genoani were formed by families with children.

Genoa played a good match in the first 45 minutes with a big chance to Hernan Crespo who failed to score. Between the 55th and 60th minute 3 big mistakes of the Genoa-defence, so 3 goals to Nice. In the last half an hour a lot of players were substituted but the score did not change any more: 0-3. Next week Ligue 1 starts in France and Olympique Nice is ready to start, Mr. Gasperini still has 18 days before our first important match at Thursday 20th Augustus in Europa League (drawing next Friday). In the meanwhile Genoa already sold 20.200 seasontickets, so we are close to last season with 22.856 and the all-time record of 23.125 in the last Uefa-Cup season 91-92.