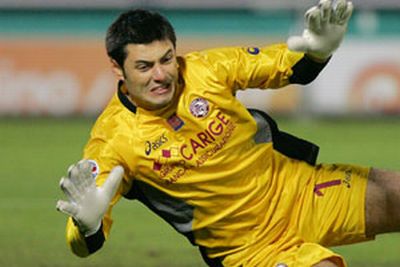 Today everybody was surprised by the exchange of goalkeepers between Palermo (Amelia) and Genoa (Rubinho). Everybody knew that Rubinho refused to enlarge his contract that ends next year and we all read that Mr. Preziosi wanted to pay him a higher salary because of Ruby’s improval last season, but nobody every thought about an exchange with Marco Amelia of Palermo. Amelia asked his President Mr. Zamparini permission to return to the North of Italy and to let him play in Europe because he wants to keep his position as second goalkeeper of the National team of Italy behind Buffon. Now both goalkeepers and both clubs are happy, but our Mr. Gasperini has to create a complete new hart of the team with the departure of Rubinho, Ferrari, Motta and Milito.

In the meanwhile Genoa also found a new shirtsponsor with the Italian Fashion company Gaudi Trade and Wednesday we draw 0-0 against Reggiana (Serie C-1) in Reggio Emilia.