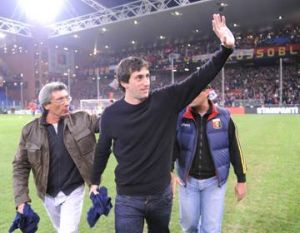 For the first time in 26 years Genoa lost a homematch with a difference of 5 goals. Last Saturdaynight Inter played one of their best matches of the last years and beat Genoa by 0-5. Unless the ball-possession of 53% Genoa shot only 1 time on the goal of Inter goalkeeper Julio Cesar. Omar Milanetto scored, but the goal was dubiously annulated because of off-side. The black and blue of Milano with a fantastic Wesley Sneijder shot 6 times on the goal of Amelia and scored 5 times, 3 goals in the first half and the other 2 after the tea-break. With 13 points in 8 matches Genoa is now 6th in the standings.