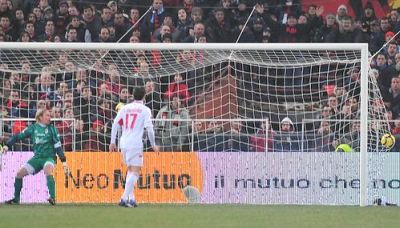 Unless the fact that our goalkeeper Marco Amelia could play cards because he had almost nothing to do tonight we only draw against Bari: 1-1. Our goal was scored by Omar Milanetto in the 52 minute.

The match started completely wrong. After the 3-0 defeat in Rome, Genoa needed some trust but after only 5 minutes Bari scored a very dubious goal because of off-side and a handball of Barreto. Now after the match we can say that this was the only time Bari was close to our goal, but at that moment it was a little shock to all Genoani. After Milanetto first missed a big chance eye to eye with goalkeeper Gillet, in the 52nd minute Genoa got a free-kick just outside the penalty-area. Omar “Hannibal” Milanetto tried to shoot the ball over the wall in the near corner, but Almiron touched the ball and it went in the far corner: 1-1. Several times Genoa was close to the second goal and Juric hit the post with another free-kick, but despite the fact the cornerscore was 12-0 it lasted 1-1. Genoa is now 11th in the standings with 28 points in 20 matches.