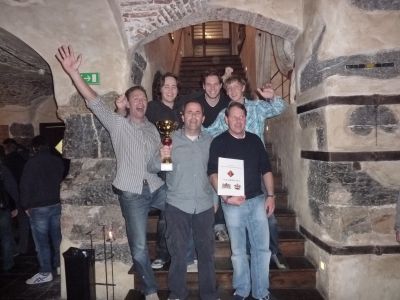 The 3rd edition of United in the name of Genoa was a big succes, just as the first 2 versions. On the tennisfields in the beautiful area of Albaro at the seaside 8 teams (6 Italian and 2 Dutch) tried to win this International tournament of calcetto. In the semi-finals the 2 Dutch teams: Genoa Club Amsterdam and the Flying Doctors played a derby, which gave G.C. A’dam the ticket to the final against Grifoni in Rete. Earlier in the group- fase the match ended in a 1-1 draw, but in the final the Genoani of Amsterdam beat the strong Genovese team by 2-3, just as Ajax in April 1992 in Luigi Ferraris. 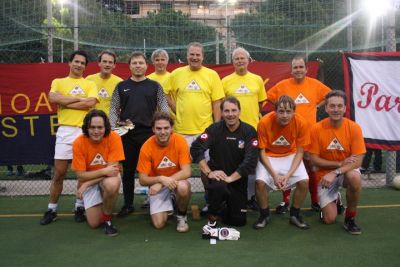 After the tournament all the 8 teams went to the beautiful Restaurant, Café, Library “Nouvelle Vague” to have a fantastic party with a great dinner. Several Italian and Dutch songs were heard in the city-centre of Genova with our loved club Genoa as the shared religion of all. On Sunday everybody went to the stadium to see Genoa Club Amsterdam player of the decennium Marco Rossi score the winning goal against Catania. Thanks Luca Carini and friends to give us all a fantastic weekend ! Next year at 21st May we hope to see you all in Holland at the 4th edition of United in the name of Genoa.