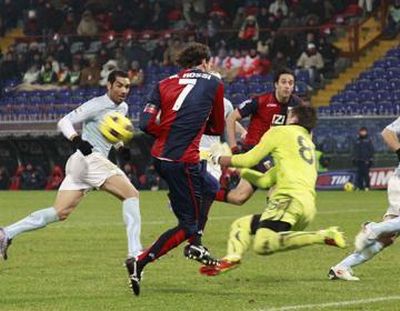 The first match of Genoa in 2011 ended in a goalless draw, which was the most right result. Genoa started the match with Bosko Jankovic in the line-up and Kaka Kaladze to substitute Andrea Ranocchia in our defence. In the first half runner-up Lazio was the best team in the field, but Eduardo kept his goal clean. In the second half Genoa played more offensive and created the best chances, but Toni, Rossi and Kaladze missed them. On the other hand Lazio was most close to open the score when Hernanes hit the post in the 60th minute. With this result Genoa stays on the 10th place in the standings, while we played 1 match less because of the posponed derby.

Since President Preziosi gave Luca Toni a 3 on a base of 1 tot 10 in an interview the rumours said that our most earning player (€ 4 million a year) wanted to leave our club. Yesterday against Lazio also a part of the Genoa-supporters whistled at the moment Toni touched the ball, because they expected Toni to admit his disappointing way of playing instead of immediately saying that he would leave Genoa. Of course a President must never criticize a single player in the newspapers, but also a player must not immediately react by saying that he wants to leave the club after some critics, especially if you don’t play very good and you earn an enormous salary. Luca Toni today singed a 18 months contract with Juventus. Genoa did not even ask a transfersum, in 18 months the club saves € 6 million salary which is enough to Mr. Preziosi. The substitute probably will be the Argentinian striker Mauro Boselli of Wigan (England), the former teammate of Rodrigo Palacio with Boca Juniors.