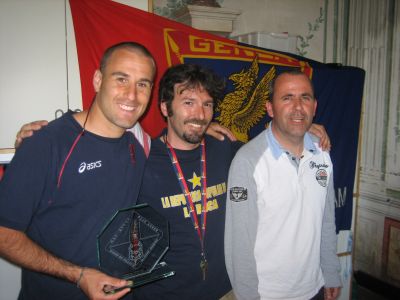 The day before the derby member of honour Luca Carini and Hans Otten went to the Pegli-trainingfield to present the trophy of Genoa Club Amsterdam Genoano of the year 2009-2010 to Rodrigo Palacio. In his first year Rodrigo immediately became our topscorer and showed everybody that he did not had any problems with the Italian footballstyle. Also this season Rodrigo scored 9 goals and gave many assists that were scored by his teammates. Just after we honoured very friendly Rodrigo big teams like Roma and Inter are at once interested to buy our favorite player. Maybe next year we have to give the trophy in silence to our best player ….  Forza Rodrigo, resta con noi !!