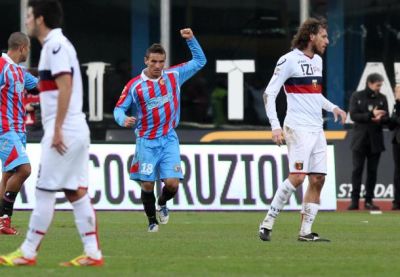 Again a big defeat of Genoa in an away match after a great game in Luigi Ferraris. Coach Pasquale Marino don’t understand the big difference between Genoa at home and outside mama Ferraris. In our own stadium we create many chances and have an average of 3 goals the last matches, in awaymatches the opponent has an average of 4 goals the last weeks. In Catania midfielder Valter Birsa already in the 7th minute made a stupid and unnecessary foul in our penaltyarea which gave the hometeam a penalty: 1-0. In the second half Barrientos of Catania scored twice in the first 7 minutes: 3-0. Ten minutes later the final score of 4-0 was already on the scorebord. Besides the 4-0 defeat we also lost Kaladze and Mesto with a yellow card, so they can’t play in Bergamo Wednesday.