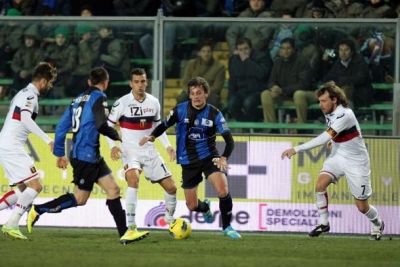 Last Wednesday Genoa lost by 1-0 in Bergamo against Atalanta. It probably was the worst match of Genoa since the return in Serie A in the summer of 2007. The team played without any confidence after the big defeats outside Ferraris the last matches. Halfway the 2nd half Juraj Kucka headed the ball on the crossbar and a few minutes later Atalanta striker Denis did the same at the other side above Sebastien Frey. With both teams hitting the crossbar once it seemed a typical 0-0 match, till Marilungo scored the only goal 12 minutes before the end. Genoa stays 10th in the standings with 30 points.

Tomorrow Chievo arrives in Marassi, so we hope again to see a completely different Genoa. Our coach Pasquale Marino misses the injured Alberto Gilardino and the defenders: Antonelli, Bovo, Mesto and Moretti.