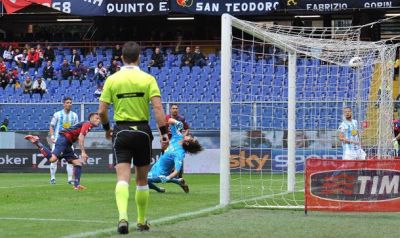 Our most important match of the year was the title in the newspapers in Liguria to the match Genoa-Pescara. Of course the match was important because both Siena and Palermo had difficult away-matches so this was the chance to Genoa to finally leave the relegation-zone. Usually the team stays together from Saturday-evening 7 o’clock but this time the players were already together from Friday-evening. Genoa still missed Kucka, Olivera and Rossi in midfield. Just as the last half an hour last week in Verona we started with Borriello and Floro Flores as strickers and  Bertolacci just behind them. In the 19th minute a freekick of Matuzalem was a little to hard, but just before the backline Manfredini headed the ball back before the goal and Floro Flores headed it behind goalkeeper Mattia Perin : 1-0. In the 30th minute Marco Borriello scored a fantastic goal with a hard shot from outside the corner of the penaltyarea high near the second post: 2-0. Finally we all hoped that the last hour of the match would be very relaxed, but 6 minutes later Giuseppe Sculli headed 2-1 behind Sabastien Frey. Of course our ex-player immediately excused himself to Gradinata Nord for the goal. Halftime: 2-1. 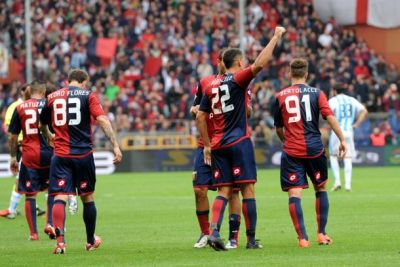 In the second half Genoa decided the match within 25 minutes. After 9 minutes Marco Borriello scored his 12th goal of the season and 16 minutes later Andrea Bertolacci scored 4-1. Because Siena (3-0 in Catania) and Palermo (1-0 against Juve) lost their matches it was a perfect Sunday for Mr. Ballardini and the team. Wednesday we play again, this time in the Olympic stadium of Turin against Torino which has 36 points, just 1 more than our Rossoblu-team. Another victory means that we have 4 teams below us. Forza Genoa!