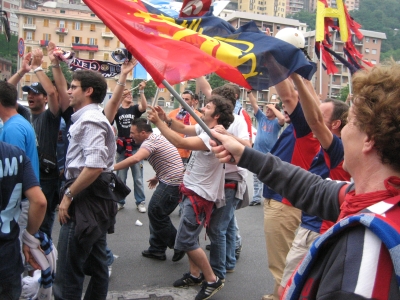 In Holland the last years there are play-offs after the competition. The Netherlands has 6 tickets to European Cup football: 1 in Champions League, 1 in pre-round Champions League and 4 in Uefa-cup. The champion of Holland at the end of the regular league is qualified to play in Champions League and the winner of the Dutch cup automaticly plays in Uefa-cup. The other 4 European places are to win in the play-offs, which makes the play-offs very important and spectacular of course. Because your season-ticket don’t count in the play-offs you have to pay a single ticket if you want to see a game. Only because of this fact many thousands “supporters” boycot the most important and spectacular games of their team in the season. They stop supporting if they have to pay.

In Italy football-supporters are more proud to the club, the players, the city or at least the shirt. Italian fans don’t think so individual as a lot of Dutch supporters. If the club needs you in the most important (and spectacular) matches of the year you have to be there to show the meaning of: to support. In the Italian language they say assistere, which means just like to support in the English language: help your team. In Holland a lot of fans first (or only) think about themselves and don’t understand the meaning of to support. The passion of the fans is one of the many reason that makes Italian football much nicer than the football in Holland.