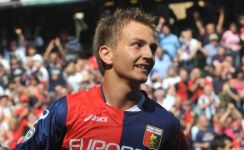 Tomorrow Domenico Criscito returns in the team of Mr. Gasperini. Let’s hope his return last longer than the half an hour in Lille when it seemed that Mimmo returned too soon after his injury. Genoa plays tomorrow in Luigi Ferraris against number last in the standings Siena, but also because Genoa played an energetic match this week against Lille it won’t be an easy match. The following 19 players are ready to play tomorrow: