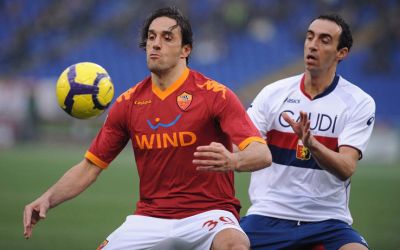 The feeling before the match was good, unless the fact that Genoa missed 3 of the 4 wingstrikers with Jankovic, Palladino and Palacio. Only Giuseppe Sculli was able to play, but also he had to leave the pitch with an injury after only 30 minutes. At that moment Roma already took te lead by a goal of Perrotta in the 16th minute. When Mesto missed a great chance to score the equalizer and Luca Toni scored the 2nd goal of Roma the match was over, while there were still 45 minutes to play. In the 2nd half Luca Toni also scored his second goal and Sculli’s substitute Ivan Fatic missed a great chance eye to eye with the goalkeeper of Roma, so we lost 3-0. We only have to wait till Wednesday to have the chance for a revanche against Bari that draw against Inter this weekend: 2-2.